The four scenarios represent a range of land use and transportation combinations explored within the context of the Wasatch Choice for 2040. They each contain the same number of people, jobs, and amount of money spent on regional transportation, but with different levels of growth occurring in and around centers. Therefore, as stakeholders decided which scenario they preferred, they could attribute the scenarios’ advantages and disadvantages as to how transportation and development patterns unfold together, not to the amount of money or growth. The Wasatch Front Regional Council (WFRC) held several small area meetings to gather input from local governments regarding the four scenarios.

Scenario 2 is consistent with the previous Regional Transportation Plan (RTP), and each of the other scenarios feature more or less growth around centers – places like downtowns and main streets – among other variables. To learn more about the similarities and differences of each scenario, watch the Introduction and Overview of Scenarios video. 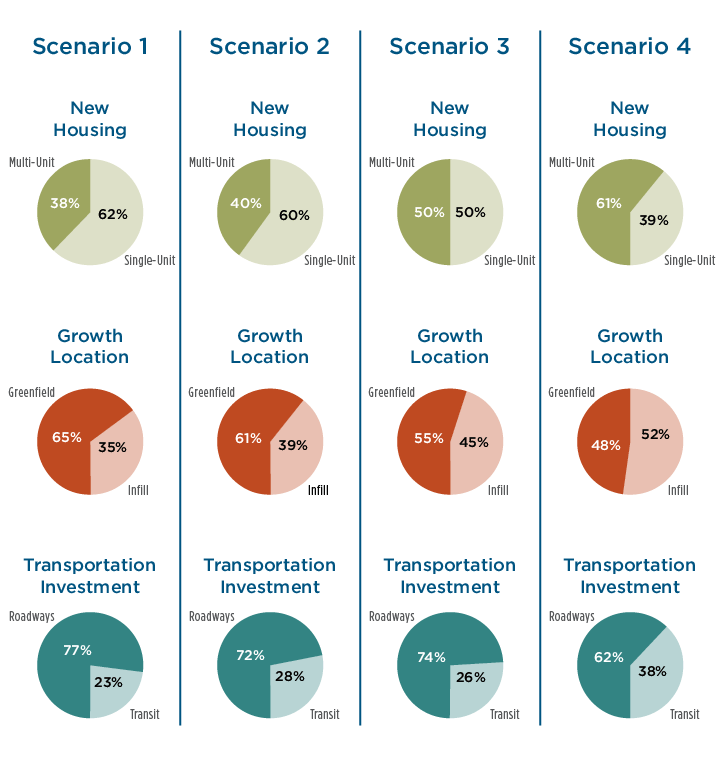 “Centered growth” is one of the key strategies of the Wasatch Choice for 2040 Vision. Strategic changes to a small percent of our metropolitan area – places like downtowns, main streets and station area communities – can yield huge benefits. These centers take the strong market for accessible jobs and moderately priced/downsized living and enables them to grow where they do the most good for everyone – in centrally located areas and places with great transportation access. Centers:

A variety of centers may continue to grow in the future that are similar to places in our region today – places like downtown Salt Lake City, Provo, Ogden, and emerging downtowns like Sandy. Centers can also be places like Station Park in Farmington, Fireclay District in Murray, Cottonwood Corporate Center in Cottonwood Heights, and smaller centers that are growing with the market demand to live and work in accessible locations across the Wasatch Front.

Each scenario varied based on a variety of assumptions. Two assumptions that had significant effects on scenarios were the degree to which growth occurs in already-developed areas, known as “reinvestment” and the mix of housing that is anticipated in the coming decades.

The scenarios differ based on the level of growth from infill and redevelopment. In general, more growth is expected to occur through infill along the Wasatch Front because expansion is constrained by geographic features (the Great Salt Lake and the Wasatch Mountains). Within the scenarios, growth through reinvestment tends to support the expansion of public transportation like bus and light rail. This explains the correlation among the scenarios between the amount of growth that happens through infill and investment in public transportation.

The housing mix also varies in the scenarios. Two-thirds of the region’s housing consists of large-lot, single-unit homes. However, major demographic changes are anticipated in the coming years. As the baby boom generation begins to retire, many will choose to downsize their homes, which will change the demand for housing across the region. The market nationwide is also experiencing shifting housing preferences among millennials. Therefore, the four scenarios explore a range of housing ideas. Scenario 1 is consistent with historic trends and considers 30 percent of new homes as smaller single-family homes, condominiums, and townhomes. Scenario 4 contemplates a significant shift and considers 60 percent of new homes as smaller-single family homes. All four scenarios are plausible given the significant demographic and market shifts anticipated along the Wasatch Front.